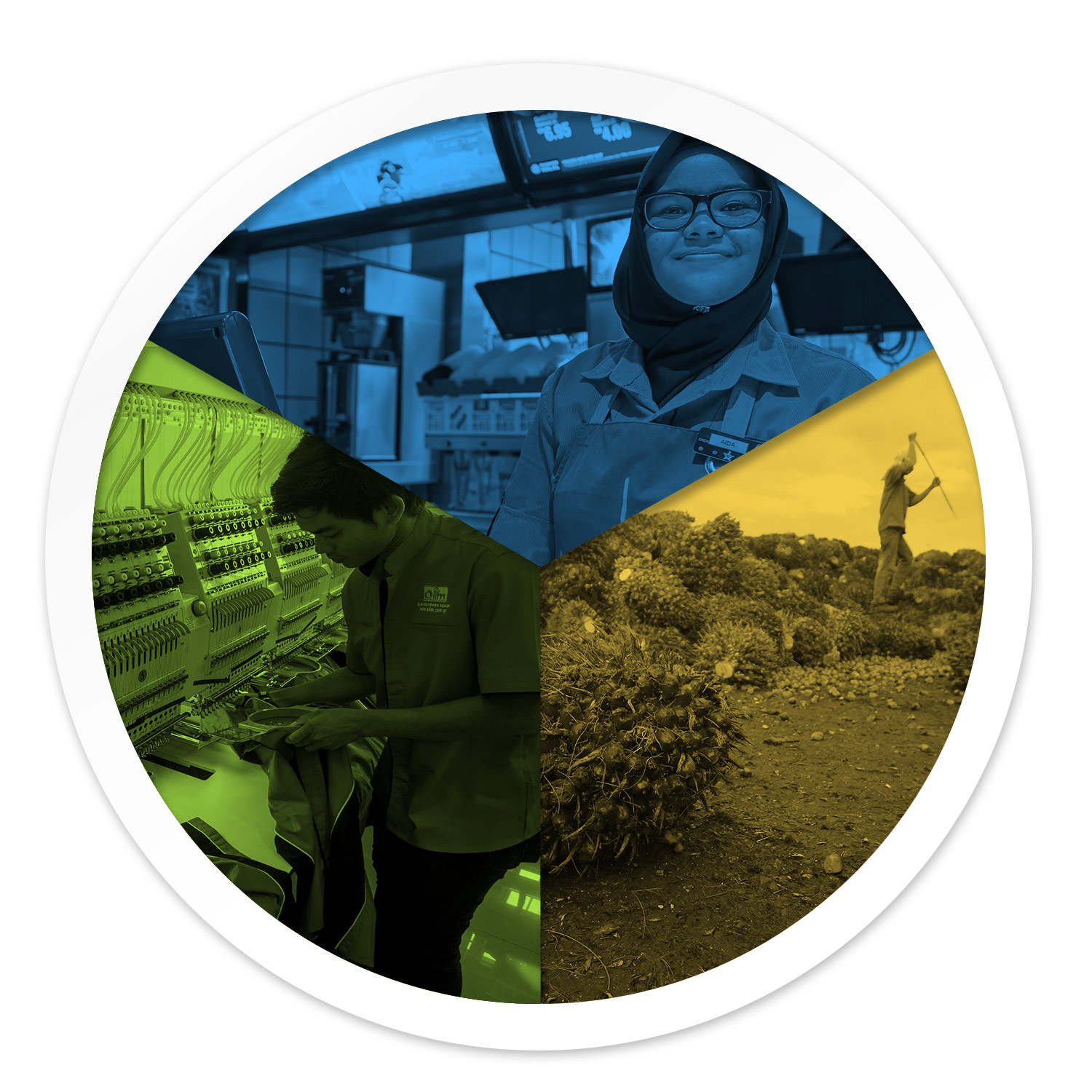 Employment by sector separates the working population of the country into three broad group of economic activities: namely the agriculture, industry and services sectors. Employment in each sector is usually shown as a percentage of total employment. These three main economic sectors can be disaggregated into additional sub-sectors to provide further details following the International Standard Industrial Classification (ISIC) System. However, ISIC itself has undergone several revision which has expanded the sub-sectoral coverage, the latest version of which is ISIC Revision 4 2008. Catalogue A below conveniently tabulates the evolution of ISIC from Revision 2 1968, to Revision 3 1990, and finally to the current applicable standard from 2008.

The data for KILM 4 is captured through the Labour Force Survey conducted periodically by the Department of Statistics Malaysia (DOS) using the household survey methodology. The indicator is further disaggregated by gender, age groups and states or regional areas.

Workers not classifiable by status are those persons who do not fit into any of the sub groups above or where insufficient information is available.

In Malaysia information is available for only 3 sub-groups of the self-employed which are: employers, own account workers and contributing family members.

The status of employment data in Malaysia is obtained through the Labour Force Survey that is conducted by The Department of Statistic Malaysia. The two categories of workers in KILM 3 are presented as a percentage of the total employed, and also further disaggregated by socio-economic factors, e.g. gender.

Why KILM 4 is important?

KILM 4 is useful for identifying broad shifts in employment and stages of development as well as identifying individual sub-sectors where employment is growing or stagnating. As the economy move to more developed higher income phases the proportion of jobs have shifted between sectors, usually from agriculture to industry and finally to the services sector. This shift also traces the internal migration of the population from rural to urban areas reflecting greater creation of jobs in the industry and services sectors predominantly in urban locations. In many instances this shift also represents a move from labour intensive primary activities to increased automation in production activities, greater innovation and the knowledge-driven economy. This conglomeration of the population and economic activities are common to the experience of many developed economies.

Together with information on vacancies, KILM 4 data on changing job trends in individual sub-sectors provides a useful picture on where labour demand is most pressing. This knowledge then contributes to policy initiatives to improve training and skill upgrading programmes to meet talent shortages in the dynamic growth sectors of the economy to support further productivity improvements.

The analysis is focused on employment in the three main economic sectors. Information and analysis of the other sub-sectors will be provided at the next update.

In 2014, employment in the services sector accounted for 60.2 % of total employment, much higher than the 46.3% observed in 1990 and in line with the growing importance of the services sector as the economy reached the upper-middle income level of development. By comparisons, in terms of output, the services sector contributed 53.5% of Gross Domestic Product (GDP) in 2014 or 53.8% at current prices. In contrast, the proportion of people finding work in the agriculture sector at 12.3% in 2014 is less than half that in 1990 (26.4%) after showing sustained declines in most years over this period. This trend is consistent with the structural shift in Malaysia’s economy as it progressed from low-value added labour-intensive agro-based production to higher value and more innovative manufacturing and knowledge-based services activities where Malaysia increasingly has better comparative advantage. In terms of output, agriculture contributed just 8.9% of real GDP in 2014 compared to 16% in 1990 and a massive 32% back in 1970. Manufacturing employment has experienced relatively more variability over the years. While employment in industry (comprising of manufacturing, mining and quarrying, electricity and water supply activities) for 2014 recorded 27.5 %, manufacturing was a sector where many people found jobs in the past, 32.3% in 1995, rising from 27.5% in 1990, during Malaysia’s manufacturing boom phase before the new growth areas saw faster job creation in the services sectors.

The limitation and comparability considerations relate mainly to the data collection process. In particular, the definition of employment and the Employment by sector (KILM 3) if not captured appropriately may cause some distortions or understate employment in some sectors. Thus the self employed, like unpaid family workers and jobs in cooperatives, may be unduly left out thus misrepresenting the share of jobs in the agriculture sector where such persons may be prevalent. Similarly, self-employed service professionals like accountants, financial advisors as well as unpaid family workers in family retail outlets and eateries, may escape capture and thus lead to understatement of service jobs. In transition, the changing ISIC sub-sector classification may affect comparisons where they overlap or when analysing time series trends. Above all most caution is needed when comparing employment by sector information between countries. It must be clear which ISIC codes the country is applying and to make adjustment for countries that include the members of the armed forces in the labour force. Countries may also use different survey methodologies or combine LFS and household census information to generate their KILM 4 data.

More details from the ISIC sub-sectors should be presented in the next round of updates together with the relevant analysis of evolution in employment prospects for the workforce and across gender, age group and geographical dimensions. Selected benchmarking against the experience of other countries will contribute to better contextualising the issues and improve policy formulation to strengthen employment prospects and job creation.